Creatures in the House 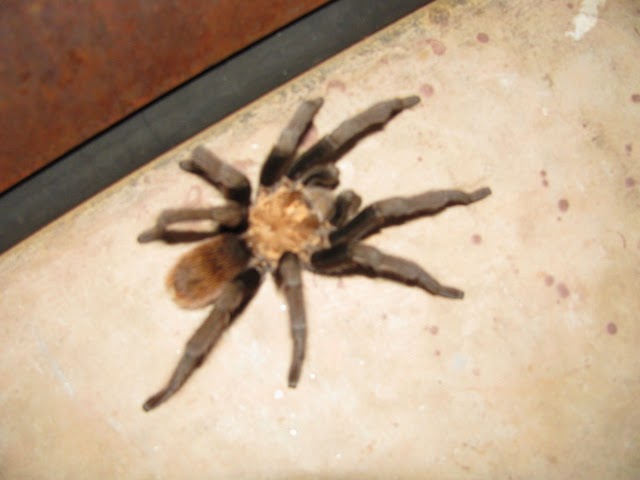 One of my friends Back East is starting to think about moving some place where the winters aren't so harsh and the taxes aren't so high. She asked about the aggression of the fauna in Tucson, particularly the spiders.

Once I answered the spider question, I was on a roll with describing my experiences with wildlife that found its way into my house. Steve said this was really mean and I went overboard. Being the personality type that I am, I of course think if what I say is true, why would anyone be offended? I don't remember the name of the personality type, but that's me. Here's what I said.

We have loads of spiders, and they do bite. In the summer, I usually have a few bumps or red marks I can't identify. I have two right now. They disappear, usually painlessly, in a day or two. Some spiders, like the black widow, which I have found in my house more than once, are poisonous even to people who aren't allergic, but usually not fatal. I have also had very startling encounters with wolf spiders, which are about three inches in diameter, and love to hang out on top of doors. They fall on you when you open the door. Otherwise they are harmless, as are tarantulas, which are about five inches in diameter. I have never seen a tarantulas inside the house, but armies of them can be seen crossing dirt roads during mating season. Charming, isn't it? 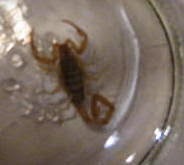 I have not yet been stung by a scorpion, but I have killed plenty of them in my desert house. This is more of a problem in the desert than it is in town. I never saw scorpions inside the house in town. A scorpion sting won't kill a person, but it will make life pretty miserable for several hours. This is a scorpion I caught in my kitchen. I put it under a glass bowl on my table so I could photograph it before its demise.

We have had snakes inside the house in town, though. That is always exciting. I think they came in through a hole in the doggie door, because we haven't had any in the house since we discovered and closed the hole. The kind that have come in the house were not poisonous, and we were able to capture them and put them outside. See my blog post, The Snake Chronicles. We like to have them outside because they eat the pack rats. I don't know anyone who has been bitten by a snake. We have encountered rattlers on our hikes and I occasionally see one curled up on a porch or under a pool filter when I'm showing a house, but snakes want to be left alone. They are typically not aggressive and if they bite, the skin may necrotize, but the person probably won't die, although I understand that for a while he may wish he would. The typical snake-bitten person is a drunken male in his 20s who was handling or provoking the snake. 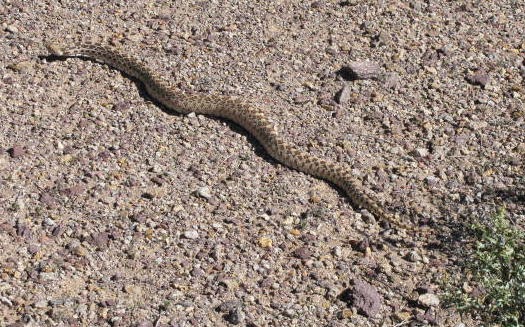 This snake was not in the house. We met him when we were hiking in the Tucson Mountains. He was next to the trail, and I had just passed him without noticing. I heard a cough behind me and turned around to see what it was. I thought it was a javelina, but it was this snake, slithering away toward his hole.

We have had pack rats in the attic, which I tolerated for a while until one of them died inside the pantry wall and made a huge stink. Then I had the attic cleaned out and I repaired the screens on all the attic ventilation holes that the rats were using for ingress and we haven't had pack rats since.

We also had a skunk in the hall furnace closet in our house in town. It came in through the fresh air vent in the foundation. We've screened that off, too, and I don't think he has any wildlife in there these days.

It does take a certain type of person to love the desert. There is an article on my blog called Bedouins and Gods that explains it. There is magic in the air here.

I think I may have blown any chance of getting my friend to visit Tucson or consider moving here.
Posted by Waltzin' Matilda at 3:27 PM

Email ThisBlogThis!Share to TwitterShare to FacebookShare to Pinterest
Labels: Urban Wildlife Sightings, Why I Love Tucson