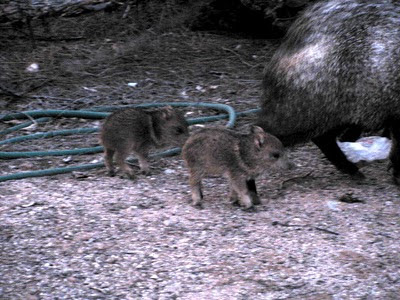 Just before dusk one evening in March, Steve and I noticed our cat Sunbeam was very alarmed about something going on in the driveway of our Central Tucson home. We looked over the wall, and as expected, we were about ten feet away from the biggest family of javelinas we have seen in our yard. Four adults, two juveniles and two tiny babies were planning to knock over the 50 gallon garbage can again. 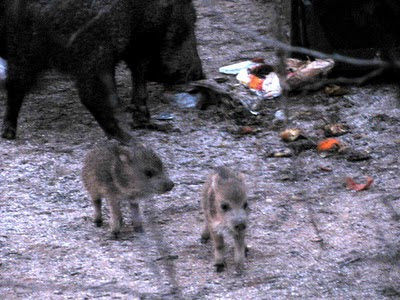 We had never seen such tiny babies. They were about the size of a Chihuahua, but much stouter, of course. One of the adults gave the can a heave, and it crashed to the ground. They seem to be getting smarter about which way to push the can so the lid lands at a good angle and they can get to all the yummy stuff inside the can.

They were pulling bags out of the can, and one javelina went right inside the can to look for the choicest morsels. 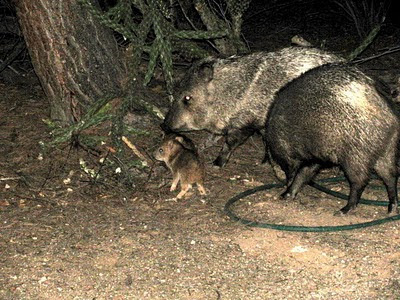 The babies kept trying to nurse as their oblivious mother stomped around among the garbage. We wondered how they avoided getting trampled.

Steve and I watched all this with fascination, but we know we shouldn't encourage this behavior. I asked Steve if we should scare them away, and he said no, so I was satisfied to keep taking pictures.

Even after darkness fell, and my camera started flashing, the beasts continued their feast, unconcerned about the people they could clearly see, smell and hear just a few feet away. 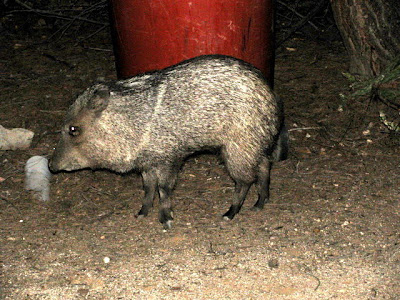 For those who don't know what a full grown javelina looks like, here's one. I have always thought that with their huge heads and tiny legs, they looked like a child's drawing of a pig.
Posted by Donna Moulton at 11:48 AM

Email ThisBlogThis!Share to TwitterShare to FacebookShare to Pinterest
Labels: Urban Wildlife Sightings, Why I Love Tucson