Solar Art on the Santa Cruz 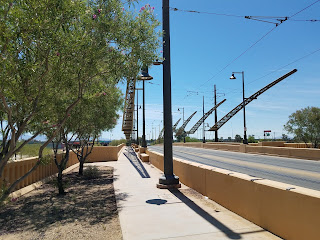 The street car bridge over the Santa Cruz at Cushing Street has been open for six years (!) and I finally went to see the solar art last week. 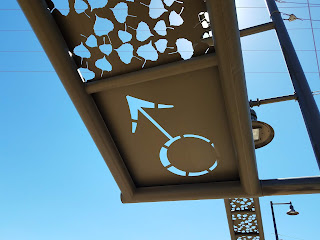 The bridge has rusted metal arcs with patterns cut into them. The side walk on both sides of the bridge has scenes from Tucson's history incised into them. A certain moments through out the year, the sun shines through an arc just right to complete an image on the sidewalk. 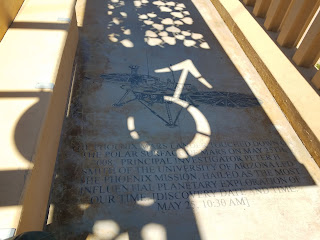 Last Friday at 10:30 AM, I went with some of my hiking buddies to see the symbol for Mars encircle the Phoenix Mars Lander. It happened to be the tenth anniversary of the Mars landing. The principal investigator of the landing worked at the University of Arizona.

On June 1 at noon, this article in Zocalo says the street car will be the illuminated image, but I'm not sure about that. As I recall, the Tucson Pressed Brick Company on the south side of the bridge will be featured this Friday.

Anyway, it's fun to think of the math and precision engineering and art that all combined to make this happen.

It's also fun to have brunch at Seis in the Mercado San Agustin after experiencing the solar art.
Posted by Waltzin' Matilda at 8:43 AM

Email ThisBlogThis!Share to TwitterShare to FacebookShare to Pinterest
Labels: Why I Love Tucson