The Fountain and Bird Bath 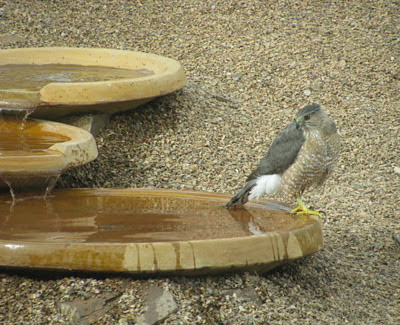 The fountain I bought from Zona Fountains hasn't quite turned out to be the wildlife magnet I had hoped it would be. I thought I would be able to lure javelina, deer, bobcats and maybe mountain lions to within 10 feet of our back porch, but it hasn't worked out that way. Maybe they are too smart to come around when I might see them. I certainly see a lot of hoof prints between the porch and the fountain.

One curious result is the appearance of urban birds I hadn't seen here before: Starlings, House Finches, House Sparrows and Mockingbirds seem to be happy to take advantage of anything humans produce that might benefit them. I hope they don't tell their Rock Dove cousins about this.

A Gilded Flicker, rarely seen here, was my first customer. I haven't seen him since. The Gambel's Quail are afraid of the fountain.

I observed that the Mourning Doves seem to be able to suck up the water directly from the fountain. Every other bird I've seen in the fountain scoops water with its bill then throws back its head to swallow. 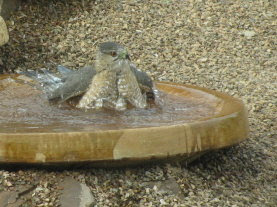 After drinking and considering the pros and cons, this Northern Harrier (Marsh Hawk) hopped in and took a bath. 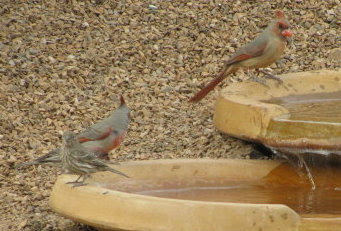 I have been interested to see a male Pyrrhuloxia and a female Cardinal hanging out together. At first glance, they look like the same bird. Both have crests, with red caps, but not red all over like a male Cardinal. The easiest way to tell them apart is the Cardinal has a red finch bill and the Pyrrhuloxia has a yellow parrot bill. When these two pose together, as they are here (Cardinal at top, and Pyrrhuloxia on the left), you can see that the Cardinal is olive green, with no red on her chest. The Pyrrhuloxia is grey, with a red streak on his chest. 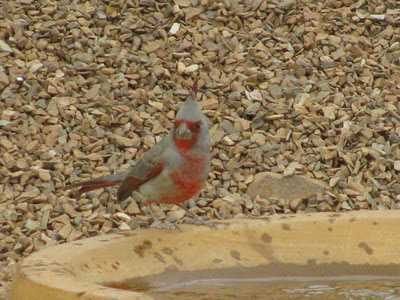 Okay, now for the test. What is this?
Posted by Donna Moulton at 6:58 PM